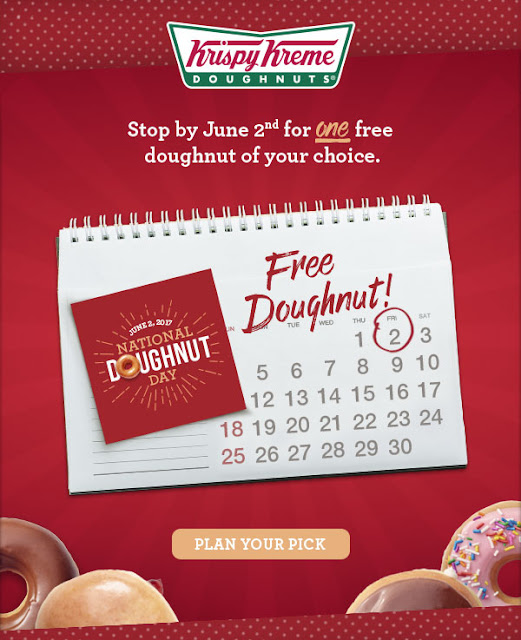 Krispy Kreme Doughnuts celebrates National Doughnut Day the best way – your way. On Friday, June 2, customers may select one free doughnut from the entire menu – any doughnut, all day long at the following shop locations throughout Central Florida:

The History of National Doughnut Day

National Doughnut Day is much more than a sweet promotion, the celebration honors a rich history of community partnership. Held annually on the first Friday of June, Doughnut Day was established by The Salvation Army in 1938 to honor The Salvation Army’s “Doughnut Lassies,” who served the treats to soldiers during World War I. The “Doughnut Lassies” are often credited with popularizing the doughnut in the United States when the troops returned home from war.

“National Doughnut Day has become a true American tradition, but many don’t realize the historical significance of the day. The partnership with The Salvation Army and Krispy Kreme brings greater visibility to the importance of the day and the idea of helping those who may have fallen on hard times,” said Major Ted Morris, Orlando Area Commander. “With Krispy Kreme’s generous offer of a free doughnut, we hope everyone will extend that generosity by giving back to support their local community.”

Below are a few additional facts about the history of National Doughnut Day and the Salvation Army:

With limited resources, these treats were fried, only seven at a time. The Salvation Army’s Ensign Margaret Sheldon and Adjutant Helen Purviance cleverly thought of frying donuts in soldiers’ helmets.

About The Salvation Army
The Salvation Army, an evangelical part of the universal Christian church established in London in 1865, has been supporting those in need in His name without discrimination for more than 96 years in the Orlando Area. Nearly 30 million Americans receive assistance from The Salvation Army across the United States each year through a broad array of social services that range from providing food for the hungry, relief for disaster victims, assistance for the disabled, outreach to the elderly and ill, clothing and shelter to the homeless and opportunities for underprivileged children. Eighty-two cents of every dollar The Salvation Army spends is used to support those services in 5,000 communities nationwide.


For more information, go to http://salvationarmyorlando.org/.