Join us April 16th and 17th, 2016 for the annual Ormond Beach Celtic Festival at the Casements, Rockefeller Gardens and Fortunato Park!

Enjoy a unique and colorful weekend of music, dancing food and good old Celtic Festival fun right by the river. 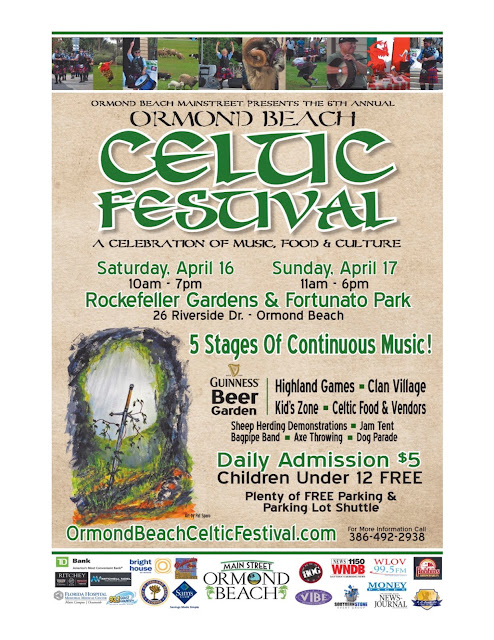 The gates open at 10 am on April 16th for two days of music, food and fun at Rockefeller Gardens and Fortunato Park. On the south side of the Granada bridge festival goers will find 3 stages of continuous music, a jam tent, Celtic food, crafts and jewelry and, of course, plenty of Guinness!!! More than 20 bands as well two Celtic dance troupes from the United States, Canada and the British Isles will appear throughout the weekend. Admission is $5 each day for adults. Children under 12 are free and there’s plenty of free parking.

Fortunato Park, on the north side of the bridge, is home to the Highland Games and Sunday sheep herding demonstrations as well as a party tent sponsored by Southern Stone featuring more bands and a beer garden. The Games are sanctioned by the North American Scottish Games Athletics organization and attract more than 50 male and female athletes from around the region to throw the caber, the hammer or the stone put.

This year’s headliner is Patrick Ball.