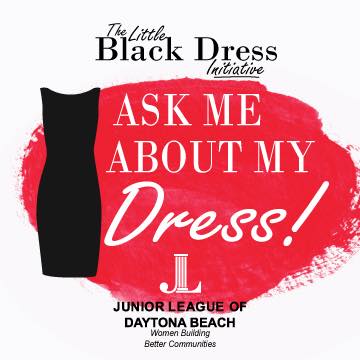 We were featured in the Daytona Beach News Journal here.

From February 15 through February 19, women across Volusia County will be wearing the same dress for 5 days in a row to exemplify the complete lack of possessions (including clothing!) most human trafficking victims have with them when they are rescued. The Volusia County women will be wearing pins with the above image and distributing educational materials designed to raise awareness of this problem.

Human Trafficking is a form of modern-day slavery. Its victims are subjected to force, fraud, or coercion for the purpose of commercial sex or forced labor. They are young children, teenagers, men and women. Trafficking in persons occurs throughout the world, including the United States. Human trafficking is both pervasive and profitable. Current estimates are that there are 20-30 million slaves worldwide and that 80% of slave trafficking is for sexual exploitation. Human trafficking is the third largest international crime industry (behind illegal drugs and arms trafficking). It reportedly generates profits of $32 billion every year. Of that number, $15.5 billion is made in industrialized countries. Not many people are aware that 3,287 people are sold or kidnapped and forced into slavery every day. That's 136 an hour and that's just the reported cases. Most of these are children and most of them are sold repeatedly for sex.  Again, it's a little known fact but it's real and it's happening all around us -- even here in Volusia County. In 2015 there were 43 cases of human trafficking of minors in Circuit 7 and 34 of them were located right here in Volusia County.

The Junior League of Daytona Beach currently provides backpacks filled with clothing, hygiene items, and a few extra personal pieces to local law enforcement to distribute to these victims so they can begin to rebuild their lives with basic necessities after being pulled from these dangerous situations.

In February 2014, the Junior League of London pioneered the Little Black Dress Initiative (LBDI) with the goal to "Make Poverty Unfashionable." While their fellow Londoners were attending London Fashion Week that month, local Junior Leaguers were wearing the same black dress every day to work, parties, dinners and events to raise funds and increase awareness of poverty in the city. The first campaign was so successful that they decided to take the initiative worldwide.