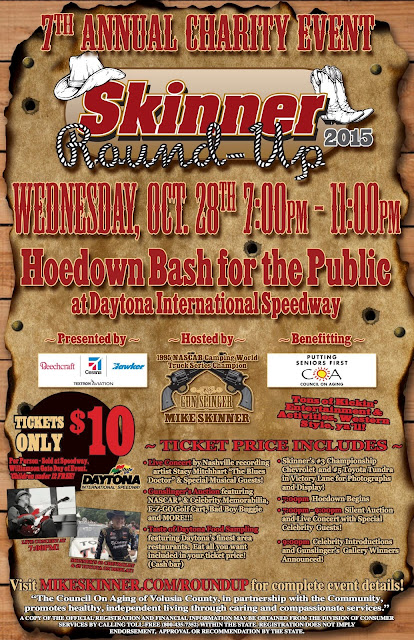 I really love this event. Megan and I went each year and I am so glad that it isnt during testing any more. The weather is gonna be so much better! Some of my favorite pics from years gone by (wow, we look young)


This year it is back on! This is a well attended event by the best parts of the NASCAR and Daytona Beach community (moi included, merci!) I bought my tickets here and so should you!

Mike and Angie Skinner to Host Two-Day Cessna Skinner Round-Up Benefitting the Council on Aging of Volusia County on October 28-29, 2015

The Cessna Skinner Round-Up is back in Daytona Beach, Florida! After taking a brief hiatus the two-day charity event returns to Volusia County on October 28-29, 2015 to benefit the Council on Aging of Volusia County.  This year's event will kick off with a party in the infield at Daytona International Speedway with the Hoedown Bash on Wednesday, October 28 at 7 p.m. ET. Registration for the Cessna Skinner Round-Up Golf Tournament presented by Halifax Health at Spruce Creek Country Club will open on Thursday, October 29 at 10 a.m. ET.

"After moving to North Carolina for a few years, Angie and I really missed our neighbors in Volusia County and the Daytona Beach community," Mike Skinner said.  "We knew it was time for us to come back home, and we were excited to reintegrate ourselves in the community once we arrived through events like the Skinner Round-Up.  We're so excited to bring this event back to Daytona Beach.  We have some great partners involved in this year's event-Cessna, Hard Rock Seminole, Halifax Health, Suntrust Bank, Oral-B, Toyota, and so many others.  I can't wait to see the impact we're able to make within Volusia County."

"After participating in countless charity golf events, Mike and I started the Skinner Round-Up nearly 10 years ago as a way to benefit our local community," Angie Skinner said.  "A friend of ours works with the Concerned Citizens for Animal Welfare here in Daytona Beach, and needed help to feed the animals. We realized that if we started a charity event to focus on organizations based in and around Daytona Beach, that we would actually be able to make an impact on our local community.  All of the money that we've ever raised has stayed within Volusia County, which is really important to us.  This year, our event will benefit the Council on Aging of Volusia County, an organization that I became involved with after we moved back to Florida.  Taking care of the elderly isn't glamorous, it's a job that's often overlooked, which is just one of the reasons why we wanted to partner with them for the 2015 Cessna Skinner Round-Up."

The Cessna Skinner Round-Up will take place rain or shine.  Tickets for the Skinner Round-Up Hoedown Bash will be sold at the gate beginning at 6:30 p.m. ET on Wednesday, October 28.  Attendees should enter through the Williamson Boulevard entrance of Daytona International Speedway.  Tickets for adults are just $10, while children ages 12 and under will be admitted free of charge.  Golfers are still able to register for the Skinner Round-Up Golf Tournament presented by Halifax Health.  The tournament costs $150 per player, and will take place at the Spruce Creek Country Club in Port Orange, Fla. on Thursday, October 29.

The Cessna Skinner Round-Up is back in Daytona Beach!  Returning to Volusia County after a three-year hiatus, Mike and Angie Skinner started the two-day charity event in 2005 as a way to give back to their local community.  Benefitting the Council on Aging of Volusia County with two days of events, this year's Cessna Skinner Round-Up will take place October 28-29, 2015.  It will be a party in the infield on Wednesday, October 28 with the Hoedown Bash at Daytona International Speedway!
The event will feature the Hard Rock Seminole Concert by Nashville Blues Doctor Stacy Mitchhart, games for all ages, the largest silent auction in Volusia County, and an all-you-can-eat Taste of Daytona event. Tickets for the Hoedown Bash are just $10 for adults, with children ages 12 and under admitted free.  The party moves to Spruce Creek Country Club on Thursday, October 29 for the Skinner Round-Up Golf Tournament presented by Halifax Health. Players will take on the 18-hole par 72 course, which was named one of the 'Top 5 Best Golf Courses in the Daytona Beach area' by Golf Digest. Players are still able to register for the event, with an individual player fee costing just $150.

About Council on Aging of Volusia County:

Councils on Aging were established under the Older Americans Act by the Federal Department of Health and Human Services in 1965.  For almost 50 years, COA has been the authority on Aging Services in Volusia County, and is one of the largest service agencies in northeast Florida. We serve thousands of clients every year, through our meals programs, non-medical health services and senior activities.  COA is a licensed 501(c)(3) not-for-profit organization. In addition to some Federal and State Funding, COA offers Fee for Service options and raises funds through events and donations to better help serve clients who do not have the means to pay for care.