I cant tell you how happy I am to lead this organization!! This is awesome news! 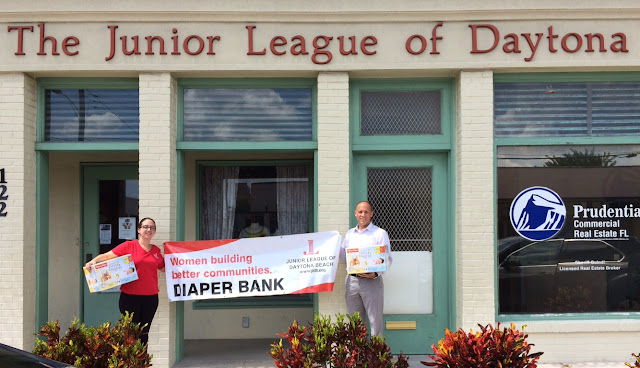 Diaper Need Awareness Week, celebrated each year during the last week of September, is an initiative of the National Diaper Bank Network (NDBN), created to mobilize efforts to help make a difference in the lives of the nearly 5.3 million babies in the U.S. aged three and younger who live in poor or low-income families.

Tom and Heather Patton, owners of Capital Office Products, donated warehouse staff time and storage space for the diapers. "Capital appreciates the partnership we have with Domtar / Enterprise group.  Their generosity with a truck load of diapers will truly help support a variety of local charity needs." says owner Heather Patton.

"Thanks to the generosity and donation of diapers and space from Domtar and Capital Office Products, the Junior League of Daytona Beach will be able to help so many more women and children in Volusia County than ever thought possible. This donation truly gives our Diaper Bank an opportunity to work on other areas to make this project an even bigger charitable success." commented Darlynn Tacinelli, President of the Junior League of Daytona Beach.

The Junior League of Daytona Beach Diaper Bank is beginning its second year serving low income parents in the Daytona Beach area. One in three families struggle to purchase diapers which can cost up to $100 per child per month. This cost can be more than double when diapers are purchased from convenience stores, a common scenario for those lacking transportation to discount retailers.

Photos from the donation may be viewed on Dropbox

For more information about the Junior League of Daytona Beach Diaper Bank, please contact 386-253-1756 or juniorleaguedbnews@gmail.com