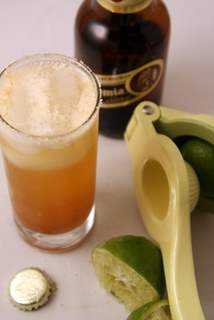 I think that it is really cute that some of you are talking about the beginning of Fall temps. I sadly won't see this until another month or so.

I also am getting tired of drinking beer or wine...no, I don't need my pulse checked...I just want to shake it up a little.

It seems that cider is the new beer or at least coming back and gaining popularity.

Hard cider was the beverage of choice during colonial times in America. In late 19th Century, Eastern European immigrants brought with them a taste for beer, and with the years it took over the market.

Now that the hard cider is making a comeback some people think that it will become the new “craft beer”.  Meanwhile, why not mixing the taste of beer and cider to bring the best of both worlds?

So I suggest Bohemia Apple Lime Cider which incorporates Mexican Bohemia beer with unfiltered apple cider. This cocktail has a light, tart, and refreshing taste perfect for hot summer days. This is good if you are like me and don't like sweet sweet drinks. Check them out on Facebook here.

1.       Mix salt and sugar on a small plate. Use a lime wedge to moisten the rim of two beer glass. Dip the rims into the salt mixture.

2.       Mix cider and lime juice in small pitcher. Divide among 2 beer glasses. Top with Bohemia. Serve with a lime wedge.