This weekend, we had the honor of attending a wedding in Savannah. It was my husband's college roommate and a group of us went up there for the weekend. It was kind of cute, although he would shoot me if he read this, but my brother-in-law got in the car and said with a big smile-"Our First Official Tacinelli Road Trip!" Savannah is very beautiful and it waas a quick three hour jaunt from Daytona to get there. 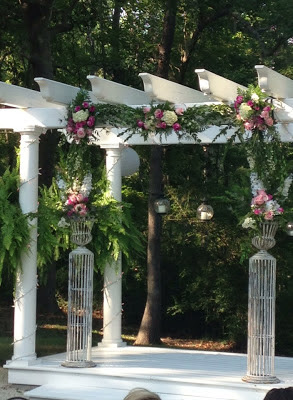 I was excited because finally there was a wedding that I could sit and enjoy and revel in its awesomeness and I was certainly not disappointed. It was at the Mackey House which is a 200 year old property that has an amazing history. It was gorgeous!! I was really jealous impressed that they pulled off a small, intimate wedding. Embarrassingly, I cried through the whole ceremony...that isn't terribly out of character for me...but fairly I love them both but I havent known them that long.

Maybe it is because I now know how special marriage is. It isn't that it is much different, but just better...does that makes sense. I smile a lot more. Its a weird inner peace. I think I have said that already, but it bares repeating.


Funny enough, the groom and my husband chased each other down the alter....not on purpose.

With two extremely patient girlfriends, we got engaged within a month of each other and married within a month of each other as well. It was kind of neat because even though the two girls didn't know each other that well, having that in common was kind of cool. You do know planning a wedding can make you bat crazy yes? I think the boys enjoyed the commonality as well. They shared a couple of lengthy phone calls on the trials and tribulations of the wedding process!


Luckily I had just come back there in late April so I was Julie the Tour Guide for most of the trip, but I think I did a great job! We got our eat on at The Old Pink House, The Warehouse for consistent libations on River Walk and Rocks on the Roof and Rocks on the River.

If I could tell you to go anywhere, that probably would be there. It is attached to the Bohemian and they have the best Bloody Mary's and the most fantastic Shrimp and Grits. The Rocks on the Roof visit was my first time there and we went (when else) at sunset. Absolutely gorgeous views, great drinks and reasonably priced. Good Stuff.


Last night we went to a dueling piano bar called Savannah Smiles. It was fun, but boy were we the oldest people in the place. There were four or five bachelorette parties there. Lets just say THANK GOD we never went there when my hens and I were in Savannah for mine. haha! Get out the wheelchair, its over! It reminded me of the Sex and the City episode when it was Carrie's 35th and the girl next to her was turning 25 complaining how old she was. But who doesn't like a singalong and it was the nice way end the weekend.

Hope you had a nice weekend as well and Happy Father's Day. I miss my daddy terribly today and I am thinking of my two friends who have just recently joined the Daughter's Day club. It sucks. But it will get better! My friend Nada shared a great article from Darling Magazine on What To Say To A Fatherless Friend On Father’s Day.

Email ThisBlogThis!Share to TwitterShare to FacebookShare to Pinterest
Labels: Me-Inc.