Admission, most every day is martini or vodka day for me...but I will take on every opportunity to celebrate without feeling guilty!

Three Olives Smores vodka is awesome, on the rocks, with water or in this delicious martini that I am able to share the recipe with you! 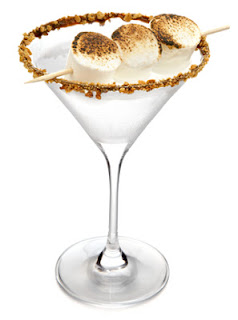 Three Olives® Vodka possesses the attributes of an ideal suitor: Polished. Approachable. Full of Verve.Inspired by the classic vodka martini served with a garnish of olives, Three Olives launched as a non-flavored vodka brand in 1998 and became a pioneer of the flavored-vodka market when it introduced the first-ever cherry and grape varieties in 2001.

Acquired by Jersey City, N.J.-based Proximo Spirits in 2007, the super-premium vodka brand now offers over 20 different flavors that have fueled a three-fold increase in sales to nearly 1.5 million cases from half a million.

As implied by the brand’s other popular flavors - Cake, Bubble, Dude and S’mores - Three Olives delivers one-of-a-kind drinks that appeal to polished individuals who revel in their uniqueness; they are clever, witty, and loath to take themselves too seriously.

Three Olives Vodka is imported from England where it is harvested from wheat and undergoes quadruple distilling to produce a smooth texture that is easy on the palette, without burn or strong alcohol taste. The brand’s flavored 70-proof vodka is 35 percent alcohol and its 80-proof clear vodka is 40 percent alcohol, appealing both to newer consumers who like to socialize and those over 35 years old who relish quiet moments.

Find more about Three Olives on Facebook and on the web!
Pin It