The Need To Be Validated

I was watching the Today Show (how many blogs can I start THAT statement off with, really) and they were reporting that Oprah spoke at the commencement ceremony at Harvard. The teaser was this: Listen to what Oprah has said to be the single most important lesson she has learned in her twenty five years in television. When Matt mentioned Oprah's piece of wisdom I almost dropped coffee. Oprah repeated in her words of wisdom to the Harvard graduates what I had up to that point thought she just scribbled on the back of her O Magazine several years ago to close out an issue.

Words that I have read and reread every other day since I first saw it.

I was at the gym for one of the first times getting back into the swing of things after my brain surgery (another story for another bottle of wine), I actually was walking on the treadmill reading the latest issue of O and these words jumped out off the page and smacked me right in the face. It answered exactly what I was going through at the time.

I was at a job I have spend over a decade at that I loved like a family member...or at that point a very mean uncle. The economy was receding and so was my income in advertising sales. Everyone was pulling their radio ads and it was causing internal panic in the building because our paychecks were dwindling away. This was causing a fury of internal conflict and we were all fighting for the same buys. It was an emotionally terrible place to be.

To be validated. It was so simple.  Such a good reminder, it's what was missing as I had lost my way. This moment changed my life.

At the risk of ensuring that I am not describing a B Movie, I looked in my Remember the Milk to show me when this happened to timeline my actions from that point on. 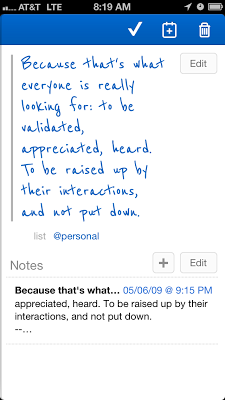 I had had enough....while my personal life was flourishing my professional life was at a dead stand still. I gracefully went back to work the next week and gave my two week notice after 13 years. It devastated me and it was a hard thing to do but I knew it had to be done. I just couldn't sacrifice the love for a job at the sake of my financial destiny anymore.

Fast forward four years later, I run a successful social media company all by my lonesome and I am so blessed to say that the company that I left welcomed me back in a freelance capacity. I am eternally grateful.

I used to say that being an entrepreneur was the most exciting and most nauseating thing I have ever done but I have a little help with some simple daily affirmations. Every day when my Iphone alarm goes off it has one of two messages on it to start my day:


She believed she could, so she did

Thank you Oprah for reminding me what it is important. Read her commencement speech here

The Today Show piece is below.

Visit NBCNews.com for breaking news, world news, and news about the economy
Pin It

Email ThisBlogThis!Share to TwitterShare to FacebookShare to Pinterest
Labels: I Say When, Me-Inc.