The Rusty Spoon Orlando-Delicious and Local Farm to Table Movement

There is few things that I love more than the Farm to Table Movement. It is very satisfying to be able to do it in your own kitchen, but I love being spoiled and having a restaurant that will do it for you and d othis right.

We have found that at The Rusty Spoon in Orlando, I was a guest of Megan's from I Run For Wine after our evening out at the Amway Center seeing Taylor Swift.

When we walked in, it was right when they opened. It gave us a good chance to take pictures of the restaurant. Located on Church Street, The Rusty Spoon is a gastropub with a local organic feel. When were admiring the beautiful pictures and atmosphere, we were greeted by Kathleen Blake, Executive Chef/Owner, and 2013 James Beard Best Chef, South Semi-Finalist.

She took time out of her busy morning to give us some information on her restaurant:

The Rusty Spoon takes deliveries in six days a week from local farms. She specifically mentioned Dale, the owner of Lake Meadow Naturals. Before he started Lake Meadow, Dale was well known in the area for his cage and hormone free eggs. He and Kathleen connected on Local Harvest, a web site dedicated to help bring small farms and consumers together and that is where she gets her amazing eggs to feature in her dishes.

Dale's eggs are the main star in The Rusty Spoon's Lake Meadow Eggs - they are deviled eggs stuffed with loads of fresh herbs, house pickles & ovendried tomatoes. I can't stop thinking about them! 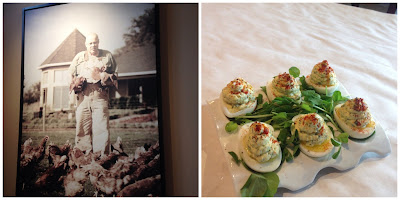 Megan and I decided to split a couple of dishes so we could try as many items as we could. First up, per usual was the Bloody Mary. As luck would have we were served by not only Brian our waiter, he is also the restaurant's resident mixologist.... solely in charge of the greatest Bloody Mary I have ever tasted. Upon some begging, he gave us some hints of what makes its so great (charred tomatoes, charred celery, jalepeno, cucumber, lemon, garlic, pepper, worcestershire, etc etc.) Heaven. 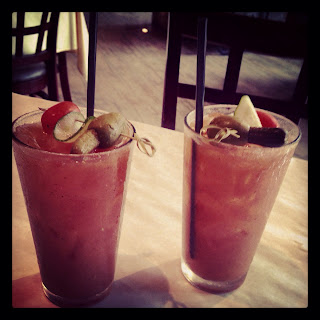 After the eggs, We chose to split the soup...Shiittinonion Soup. Best. Name. Ever. The ingredients were simple: 5 Onions, Roasted Double Chicken Stock, Topped with croutons & Melted Gruyere. I think the  Gruyere made the soup, because it blended nicely with the rest of the flavors. 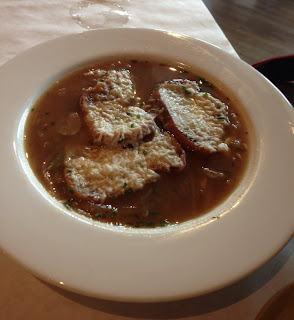 We were slowly getting the eyes are bigger than the stomach disease but it was time for the main course! After much deliberation, we decided on a burger and some handcut noodles. I say burger but I think that is not being really honest! It was a GINORMOUS side of beef! Its called the "55: 1/2 lb burger made with Grass-Fed Beef, Stuffed with Bacon & Gruyere, Smothered with Onions, Rusty Aioli & Housemade Spicy Pickles (which were my favorite) on a Soft Roll. It cames with homemade ketchup that made the Haystack fries taste that much better! 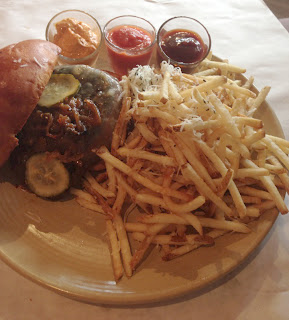 Our other choice was  Handcut Noodles - Southern Carbonara with smoked Tasso ham, peas, cracked black pepper, greens and pecorino.There is nothing I loved more than fresh pasta and it is so rare to have it cooked perfectly, and oh it was!! 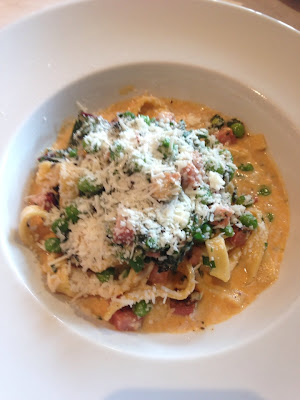 Could it get any better?? I am about to rock your socks off with my favorite part of the whole meal. Grown Up S'Mores. made with Brandy, Kahlua, Creme de Cocoa, a creative salty Graham Cracker crust, a milk chocolate center, topped with homemade marshmallow fluff with Frangelico and candied salted caramel. At this point, I was physically tapping out (I think Brian thought we were crazy) but after a couple of bites, I took it home. Last night I sat and ate this desert like it was the last thing on Earth.

Trust me, if it was-I would have died happy. 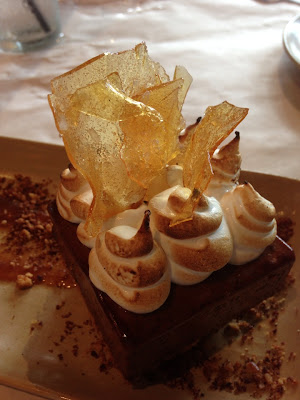 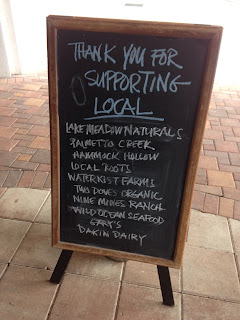