Social Media in Triumph and Tragedy

It has been a whirlwind end of 2012 and start of 2013. For the world to see on Facebook, I have celebrated and mourned. It has made me realize how much I value this platform.

It is an understatement to say I am overwhelmed with the unbelievable amount of love and well wishes we have received since announcing our engagement. I told my beau last night when we were at an event and everyone was so sweetly STILL extending well wishes that I almost don't want to get married because eventually this will stop!! I know that it is like the second coming of Christ, but really my heart is so big and warmed at the congratulations. It is unreal.

I really don't want to be that girl that plays it out on Facebook but it is really hard not to...now that my Save the Dates are out and about, people are posting pictures of THOSE, and Steve FINALLY clicked confirmed that yes, we are indeed engaged and the love fest starts over again. I hope I don't sound like I am complaining but I really am so surprised that everyone is so gracious. And cares that much...But, mostly I am glad that there is a platform for it all to take place on such as Facebook! Its a documentation, I hope to have for quite some time! 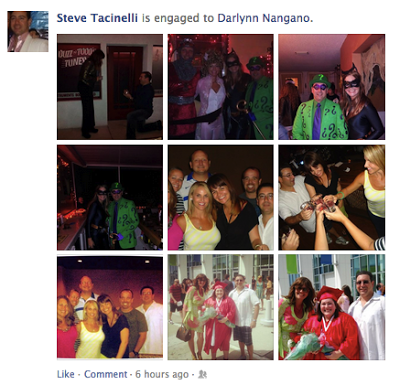 I know my best friend is having the same kind of thoughts. She is not as nerdy as me, but I know her phone is going nuts with notifications since she posted about the amazing arrival of her son Crosby. Overwhelming sweet words that validates the struggle and the long road they traveled to have this miracle in their lives.  Facebook was also an easy way to share the wonderful news on a massive scale for both of us.


So that is the triumph, where is the tragedy? A courageous battle with pancreatic cancer was lost when a friend of ours Sammy Gonzalez passed away last week. I didn't get to see him often, but my heart is broken for my friends who will suffer through this loss on an daily basis. It questions my faith, because there are so many pieces of dirt in the world...to rob this world of such a good guy makes me feel a little helpless.

The only positive was the Power of Facebook. Through his Facebook page, his wife and family and friends took the time away from their own grieving and gave us daily updates. I can only speak for myself, but I was so grateful that I had this consistent update to his progress. When he had good days, it gave you a little hope and when he didn't have the greatest of days, you said a little prayer.

This Facebook page was watched and commented by all, and it is hard to believe with all those people so openly pulling for you, his life was still lost. Even my friend who (God Bless Him) was so against the intrusion of social media started his own Facebook page, because in his words: "I wanted to tell everyone in the world about my friend Sammy G". So this sad time has its benefits (and miracles, haha).

Towards the end, I was going on his Facebook page pretty regularly because it was my easiest connection than bothering my friends who were grieving. I am sure I was not alone.The last post to announce the unthinkable, I had the sad misfortune to see it seconds after it was posted.

To leave this on a positive note, I hope like our triumphs-Sammy's family can use this Facebook page as a way to heal, to know that so many people loved and cared and was pulling for him till the end. 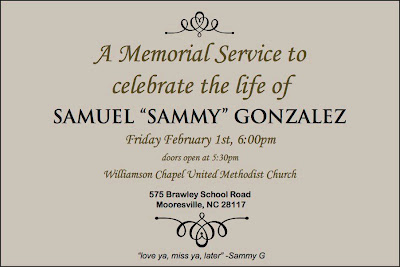