Bring It On Down To Justinville, Finally!! 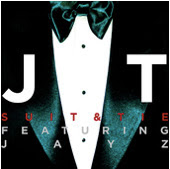 Quoting Today's Show Willie Geist: Have you felt a little in empty inside since 2006? Well, prepare to be made whole again because is SEXY IS BACK!

After teasing us with this video (below), Justin Timberlake released his first single in seven years over night on  iTunes overnight:

According to Mashable, "Suit and Tie," which is now available on iTunes, marks Timberlake's first song as a lead artist since 2006's FutureSex/LoveSounds. He was featured on Madonna's "4 Minutes" in 2008, and kept my love for him in check with multiple appearances on Saturday Night Live and some fun with Lonely Island.
"Suit and Tie" is the lead single from The 20/20 Experience, an album title he also revealed Sunday in an open letter to fans (also on his website). He says the album will come out this year. The new song features Jay-Z.
Timberlake produced his latest track with Timbaland and J-ROC. They also co-wrote the song with Jay-Z and James Flauntleroy.
Timberlake tweeted to announce "Suit and Tie." The announcement includes a link that leads his 15.4 million followers to Countdown.JustinTimberlake.com, a website he teased Jan. 10.
I love Justin Timberlake more than most people. As much as I light candles and pray (not really, that would be weird) for him to be a regular on SNL, new music will be awesome and I can't wait!! YAY!

You can get Suit and Tie by clicking here.
Pin It

Email ThisBlogThis!Share to TwitterShare to FacebookShare to Pinterest
Labels: Me-Inc.