Do you watch Parenthood? It is one of those wonderful show that baffles the beau's mind....laughing out loud one minute and crying like I lost my dog the next. Completely my FAVORITE kind of sitcom. I love the entire cast, but Monica Potter is outstanding. She also makes for a great interview, very funny!

I was excited when I found out she will be featured in an upcoming episode of the new Food Network show SUGAR DOME. The new series SUGAR DOME that premiered on Sunday, November 25th at 8pm ET/PT. Remarkable artists of all types team up for a one-of-a-kind competition to create the most jaw-dropping displays on earth. Each week, three teams comprised of artists from completely different disciplines enter the Sugar Dome to battle it out and create never-before-seen, food art masterpieces.

Imaginations run wild as a cake artist, sugar artist, and toy designer team up to create innovative food art that answers the question – what happens when a toy store comes to life at night? After a grueling challenge filled with impossible twists, only one team will walk away with a $15,000 prize.
Guest judge: Monica Potter 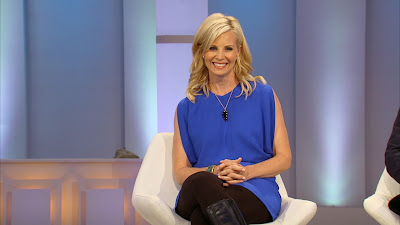 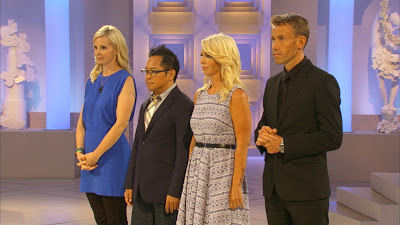 “We wanted Sugar Dome to take cake and sweet artistry to levels of creativity and innovation never seen before,” said Bob Tuschman, General Manager and Senior Vice President, Food Network., “Viewers will be in awe of the spectacles created by these unconventional teams of food artists.”

In one episode over the course of the series, animatronics experts join forces with cake and sugar artists in a grueling challenge to create a work of art that captures the magic and danger of the legendary fire-breathing dragon. In another episode, teams of sweet artists and professional illustrators combine their talents to bring the iconic world of Dr. Seuss to life. The competition continues as Hollywood costume designers, cake and sugar artists work together in a whimsical battle to create edible displays inspired by The Wizard of Oz.

ABOUT DAVID BULL:
David Bull is the host of Food Network’s Sugar Dome.  David is an award-winning TV host and over the last 15 years has hosted over thirty five shows on British and US network television, for major TV channels including the BBC, ITV, Channel 4, Five, Living, Sky and Food Network. David has had a unique career path, beginning his career as a medical doctor, working in London in the fields of General Medicine and Emergency Medicine. He started his broadcasting career as an on-screen doctor for Sky TV giving advice to those travelling abroad.  Later, he joined Newsround on BBC1, the longest running children’s news show in the world, where he became the first person to broadcast exclusively to kids about health issues. Since then his shows have encompassed all genres including talk, entertainment, consumer, health and wellness, science and technology and teenage and young people’s issues. David crossed the Atlantic in 2009 starting his US career on The Rachael Ray Show and Web MD. Sugar Dome is his first US show as host.

ABOUT PAULETTE GOTO:
Paulette Goto is a pastry chef and cake designer and has worked in some of New York’s most famous restaurants.  Paulette worked alongside master pastry chef Jacques Torres at Le Cirque in Manhattan before opening Jacques Torres Chocolates with her now husband, Ken Goto.  Paulette graduated from the pastry arts program at the French Culinary Institute, where she won the Andre Soltner award of excellence.  She has had her cakes published in Bride Magazine.  Paulette is a contributor on Cooking Channel’s Unique Sweets.

ABOUT PICHET ONG:
Pichet Ong is a self-taught, award winning pastry chef for Sugar and Plumm, a bistro, bakery and chocolate maker on Manhattan's Upper West Side.  He has worked with culinary luminaries including Jean Georges Vongerichten and Max Brenner.   Pichet was was selected as a “Pastry Provocateur” by Food & Wine and named one of the Top Ten Pastry Chefs in America by Pastry Arts & Design and Chocolatier.  In 2002, he was named Starchefs.com’s “Rising Star”.  His desserts, including those from Spice Market, Rick Moonen’s RM, Jean Georges, and P*ONG and batch, have garnered numerous “Best of” awards.  He is a multiple nominee for the James Beard Award in several national categories. Pichet’s cookbook, The Sweet Spot, was nominated for the World Gourmand book award and was named one of the 10 best cookbooks of 2008 by Gourmet.

FOOD NETWORK (www.foodnetwork.com) is a unique lifestyle network, website and magazine that connects viewers to the power and joy of food. The network strives to be viewers’ best friend in food and is committed to leading by teaching, inspiring and empowering through its talent and expertise. Food Network is distributed to more than 100 million U.S. households and averages more than 9.9 million unique web users monthly. Since launching in 2009, Food Network Magazine has tripled its rate base and delivers a circulation of 1.45 million. Headquartered in New York, Food Network has a growing international presence with programming in more than 150 countries, including 24 hour networks in Great Britain, India, Asia and Africa. Scripps Networks Interactive (NYSE: SNI), which also owns and operates Cooking Channel (www.cookingchanneltv.com), DIY Network (www.diynetwork.com), Great American Country (www.gactv.com), HGTV (www.hgtv.com), and Travel Channel (www.travelchannel.com),  is the manager and general partner.