There is an incredible sense of worth I feel today. Actually, that is pretty much the only thing that I can physically feel. After being sidelined by an injury, I am slowly getting back into my running game. Then I made the crazy decision to do not one but TWO races this weekend! Although I have done a couple of Fun Runs 5K, I have not done one with a real bib and a chip which would make me official. Official. Like a REAL runner. I know, I know, just lacing up my shoes and moving my feet up and down makes me a real runner. But this was exciting! 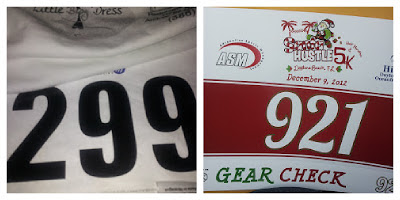 The Junior League of Daytona Beach is an organization that I belong to. I am also on the board as the Fund Development Chair. We have a 5K each year that raises money for the women and children in Volusia County. I had an amazing chair, Heidi who I adore, that organized the race with her team and it was great. The weather was kind of foggy and snow-like atmosphere, not temperature thank God! We had a good amount of runners and the event went off without a hitch. Although I didn't do awesome, well I did it...and that was really cool! I pushed myself out of aggravation of my slowness and was a little sore the next day but I had another race awaiting me.

The Santa Hustle in Daytona was a larger race that was both a 5K and a half marathon which my super duper runner friend Megan did. The weather was sunny and I was ready. It was on the beach which made me a little nervous as that is what caused my injury in the first place...but I was determined.

There is something to be said about crossing the finish line. I know that is the understatement of the century but forgive me, this was my first time. 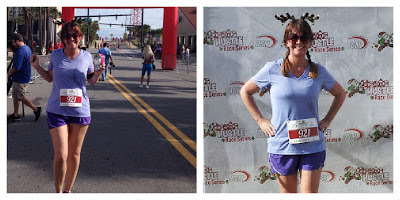 I thought I would share with you what happens when they screw up your age when you register. What is worse....the fact that I am Zero years old or that three 10 year olds kicked my ass... 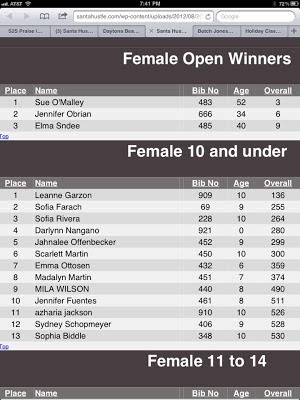 If you were wondering what kept me company during my 5K, I brought along a few of my friends:

You can download the full playlist here on Spotify. Pin It