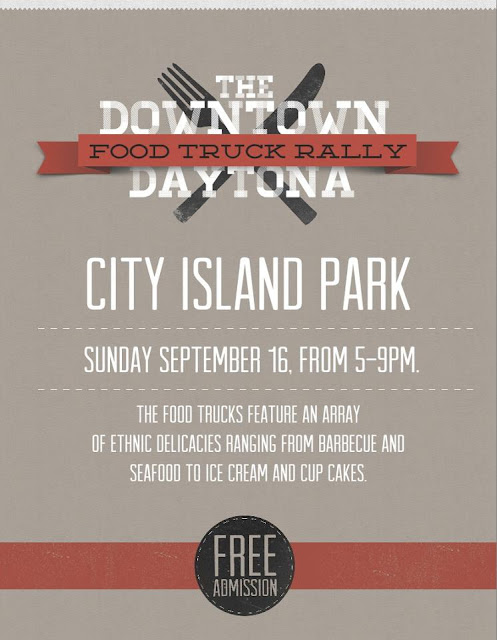 I give my area a lot of grief for not coming to the plate. Even though Orlando and the rest of Central Florida that gets it is just a few miles down the road...in good ole Daytona, we are slow to a lot of punches. We just don't jump on a lot of trends very quickly. Imagine my excitement, when my friend Al Smith starting promoting that there was gonna be a Food Truck Rally in September!

His company Al Smith Productions and Marketing holds great events throughout Daytona Beach with the intent of making us ease a little bit into urbania. That is prob not his mission statement, but it is definitely my take-away of his efforts!!

Ally and I started the day at our favorite "on the beach" haunt, The Beach Bucket for a light lunch and Bloody Mary's. 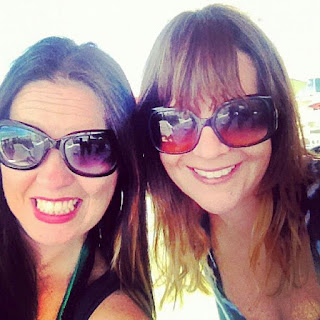 When we pulled up to the Food Truck Rally, I was pleasantly surprised that it was BUSY! Really busy and it just started! There was a bunch of different food vendors to take in. They had a couple of restaurants that were local which I expected, but Al worked really hard to get vendors that were from other areas of established Food Truck locations like Altamonte, Maitland and Orlando.
He also showed respect to the area businesses by holding it on a Sunday during dinner time when most of the restaurant's in the downtown area are closed (yes, I too think this is sad). About 18 trucks total were parked near Daytona Beach Regional Library from 5-9 p.m.

One of the best thing about the Food Truck Rally is that there was a big variety and it really suited everyone's taste.

Among the local restaurants, the food vendors were FireHouse BBQ, Saigon Sizzle, the Brisket Bus, SweDISH Food Truck, Kona Dog, The Flattery, Crooked Spoon, Stay Calm Cupcake, Shred-A-Bowls, Bemi Bom and Dimples Delight. By the way, do you notice everyone listed has a social media presence on Facebook AND Twitter? They get it!

When we first got there, I sadly wasn't starving. That was a big mistake! So, we walked around and took it all in and made a plan. You must make a plan at these sort of events!

While the Lobster Roll and Corn and Crab Chowder from Cafe Heavenly were obvious first choices, something drew me to the Tree House Truck.

I can't tell if it was the cool urban vibe that reminded me of NYC, or the menu....each item looked better than the next. The people that were in the truck were cool and very friendly and were nice enough to my Food Truck virgin self. Because it is a little overwhelming, right? Treehouse Blue Bacon Fries? Yes, please! They were awesome.


But, what might have started the hyperventilation process was the Mama's PBJ. You may want to sit down for this one-Peanut Butter and Jelly, Nutella and Banana deep fried. I should have this labeled this post unskinny and unclean but WHO CARES. It was awesome, beyond human comprehension. I could only eat one half, and happily ate the remaining half for breakfast the next day. This is making me a little sad, not being able to go get another one right now. Check them out on Facebook and Twitter and try to catch them when you can!