Well, it's official I have the funk. Sometimes I think it is someone's way of slowing an overcommitted must be in ten places go go go lifestyle kind of girl. (can you relate)? I woke up yesterday with a scratchy throat and I knew the only thing that would help is some good old fashion soup. For someone who is loves to cook, making chicken soup from scratch is something new to me. The irony is that the only time making chicken soup from scratch sounds like a good idea is precisely at the time that you would rather do anything at all but stand in the kitchen and slave over this sure to be cure.
The theories and the myths over the glory of chicken soup may or not be hogwash but when you don't feel good,wouldn't you try anything to make life better?
There are many versions of chicken soup...Greek (lemony), Italian (beany), but the Jewish version has the folklore behind it. When we were looking for prizes for my Foodie Pen Pal a month or so again, we came across  a bag of an herbal mixture called Super Soup and I promised that I would grab it and add it to my tricks the next time I felt like I was about to burst in flames, er...under the weather...here is what is in it:

I ended up tossing it in after I made my broth from scratch as Jewish as a girl who just found out her great grandma was Jewish only about 10 years ago. The recipe I tried came from this blog (Jewish Penicillin). Everything I used was fresh from the garden, which makes it that much more yummier! 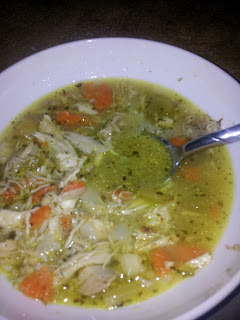 Do you feel sometimes things happen for a reason? As I am lamenting (bitching) over my sore throat, Mashable claims that marshmallows cures sore throats in an article this afternoon? How is that for fate?